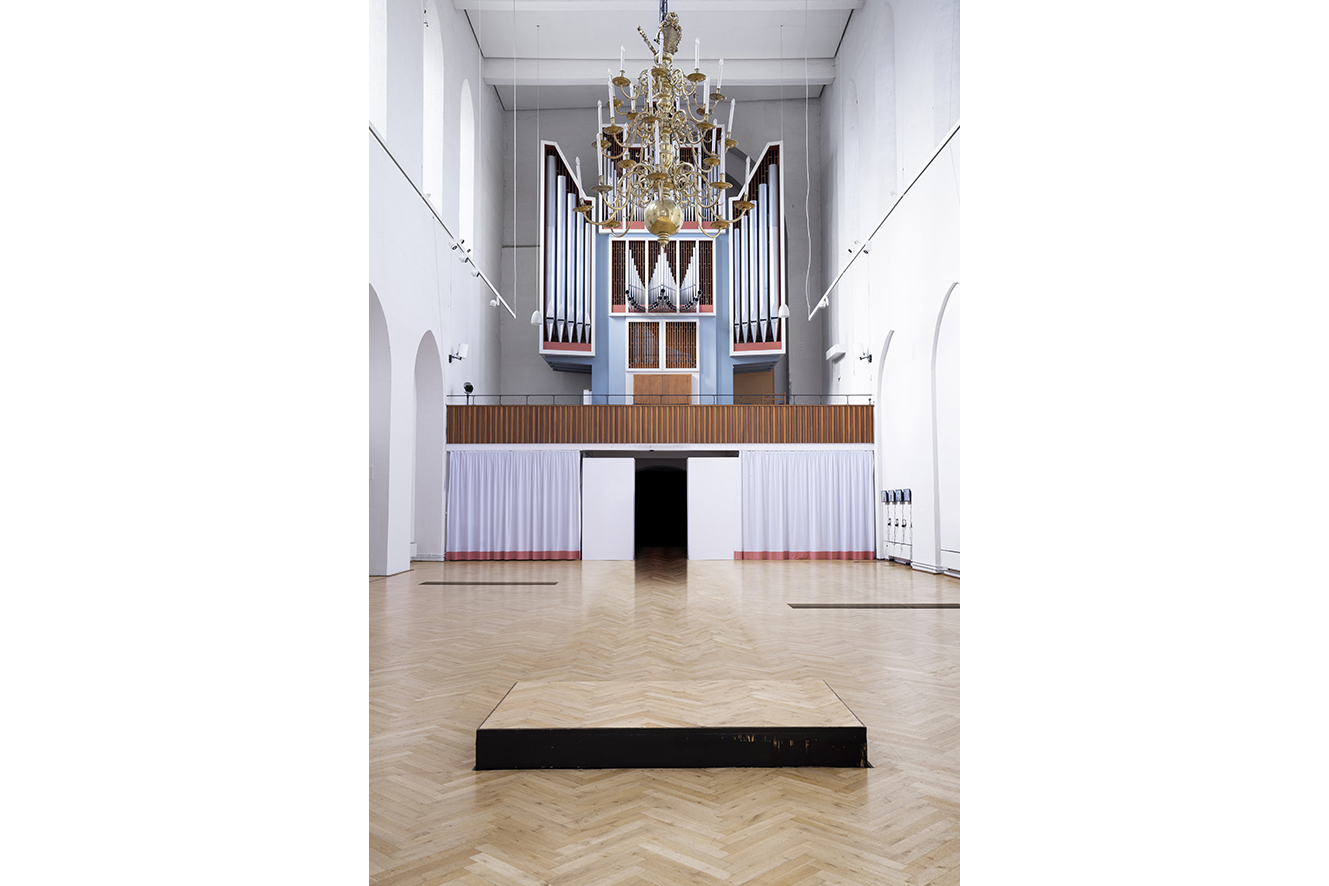 "(...)Effrosyni Kontogeorgou made the lifting stage operational again in a way that does not quite match up with its original operation. At particular intervals the platform raises itself out of the floor and then lowers back down into it again. It does not work as it was once supposed to: Its movement is jerky and its speed varies when it goes up and down depending on the weather outside, its own whimsy, or God’s superior will. Those who are brave enough can also step onto the platform; a sign warns that this is done at your own risk. One gets to see the mechanical platform in its very own, highly individual way of operating. All its executions seem completely nonsensical, as if it were a peculiar robotic being. With its susceptibility to dysfunction and its quirky moods, this kinetic thing seems almost human. In its perpetually repeated struggle, with which it clearly achieves nothing and will most likely never achieve anything, it appears mad, driven by something inexplicable, unconscious, compulsive. In the constant repetition of its action, something of the unredeemed comes through, as in the title: Punishment.

The theme of punishment in Christianity is not only well known but also an old favourite, and in this case, too, repetition is fitting. Although in Christianity everything always comes to redemption. Monks walk up and down the passageways of their monasteries, the faithful pray with their rosaries, but they do it with an end in mind, when they will be redeemed and rewarded. Eternal retribution is rather something for ancient history. Prometheus’ liver will always grow back so that the eagle can feed on it again. But since the platform’s movement varies between going up and down and is in the broadest sense related to labour being spent, the figure of Sisyphus is perhaps more appropriate. Prometheus’ punishment is however more of a punishment than Sisyphus’ punishment. The punishment befalls Prometheus, whereas Sisyphus in a sense brings it upon himself; he is the one who always fails and starts again.

That the mechanical object, brought back to life by Effrosyni Kontogeorgou, keeps reappearing in the middle of a religious site is remarkable. An appearance is not an everyday occurrence; it is spiritual, mystical, at the very least meaningful. The angel appeared to Mary to bring her a message. In Stanley Kubrick’s 2001: A Space Odyssey, a monolith appears to the apes – a rectangular pillar, quite similar to our extended platform. After it disappears, the apes discover their thumbs. They hunt, murder, and ultimately build a spaceship. Effrosyni Kontogeorgou’s mechanical monolith makes its appearance; it appears to us in the form an angel takes in the school of minimalist art."

Excerpt from the text “Archangel, minimal” by Radek Krolczyk, Translated by Ingrid Lezar